WHAT ARE THE ODDS?

Did I say from a farm in North Carolina?

Two of the boys are major league ball players, and not just for a few moments. They are not flukes to
be darn sure. Corey Seager was Rookie of the Year. Kyle Seager is in his 9th season, and so far has been both an All Star and a Golden Glove award winner.

Did I mentioned their middle brother also was drafted by an MLB team?

The odds of becoming a regular, a notable player, I mean… quite possibly astronomical. Both Corey and Kyle are considered very solid, first string.

Well ok, but how do you explain that just a few weeks ago on August 17, 2020 in the game between the Dodgers and the Mariners, Corey was playing shortstop for the Dodgers, and his older bro Kyle was playing third base for the Mariners, which is pretty amazing, and Corey will hit a home run in that game and Kyle will hit a home run in that game as well. Corey will trot by Kyle on his way to touch home plate, and Kyle will saunter by Corey as Kyle makes his way home as well.

Bottom line, who is going to sit down with mom and dad, ask them just what they fed the guys, test the soil, and do all of the meticulous scientist analysis to explain this remarkable unprecedented heretofore “you gotta be kidding me” circumstance?

Analytics is a very big deal right? So you gotta be all over this, you gotta be, no? Thing is they look so normal! 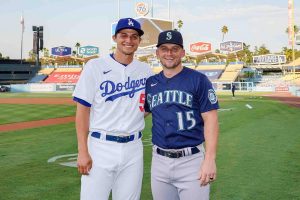