A BASEBALL FAN GOES TO A FOOTBALL GAME

What happens when a lifelong baseball fan goes to a professional football game? Not just any pro football battle, but Los Angeles Rams and the Dallas Cowboys at the state of the art stadium known as So Fi. Seventy thousand there. Packed. And many (I mean a whole lot) of Cowboy fans. Rabid fans on both sides – foaming at the mouth, and it wasn’t beer foam.

At one point cameras went through the crowd and exhorted the fans to show their muscles on the jumbo-tron. I have not seen that at a baseball game, at least not yet… I have seen the kiss cam, which typically is a bit more sedate.

My reaction is that a football game is a boisterous tailgate party during rush hour. To be sure, even walking around is not easy – there are multitudes of bodies. And you can’t be timid, at all. 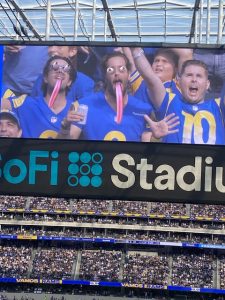 Baseball is like hanging out in a hammock, comparatively speaking. There’s time between innings. Even with a rule change next year there’s time between pitches. There’s a seventh inning stretch. Yes, football has a half time, and huddles after each play, but I witnessed it, I saw it with my very own two eyes and heard it with my very own ears: Every man woman and child is fired up, from the opening kick.

Baseball involves a first pitch into a glove. Football is a kick, and God forbid if you catch it then 11 very large men are going to seek to bring you down forcibly to the ground.

Oh, and just to make sure to say it one more time: It is wayyyyyyyy loud. It is wayyyyyy intense. I hear colorful language that would make a pirate blush. I don’t hear that cussing at baseball. I just don’t.

Well, all right then. Baseball no doubt is very boring for many.

Thank God. I must be as well.

One sport has gladiators. The other has dancers. In one they tackle each other, they put hands on, they gladly toss each other around, or round over each other. In the other they high five, pat on the back, and if they get really excited toss their bat to the ground in a fanciful manner….

For most of the time I was at the football game everything felt like a seismic event. My son was seated next to me. “What? Wait, what? Speak louder I can’t hear you!” I still am not sure of half of what he said to me, but he sure was ecstatic about something.

Baseball has a storied Hall of Fame. Football has a concussion protocol.

When the game ended and we walked to the car my son was still so energized. “I loved it! LOVED IT!” he shouted.

After we parted, I went home and rather meekly said to my wife: “I have to lie down…” Later when I woke up she said, in a kindly voice: “You should stick to baseball. Some people aren’t made for football, honey…”

I was just glad I was still in one piece. And, my appreciation for baseball has increased even more. A nice walk to the lake to go fish, whistling on the way, occasionally yelling at the sun to come out. Football more like: “Revvvvvvvvv your engines, FLOOR IT, all hell is going to break loose baby!” One is the National Past Time. The other The National Pile On.

But, I will say after giving thought, I am thinking of selling throat lozenges at football games; that might be a huge money maker. A little spritzer too – your voice going out, a four letter word that you can’t scream as loud as you want, I got what you need right here!

The next time I go to a baseball game I am going to hug any and every one. Let them tell me I’m nuts. I am not. I am just a baseball fan. This other thing, football, Lord have mercy. 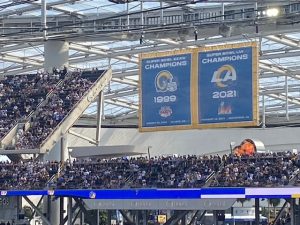