Baseball, our national past time, presently is on hiatus.  We face a war caused by a virus.

We all miss the ball park.  Many teams salute military veterans at games, and rightfully so.  Baseball, a part of our life, a part of our country, thanks those who stood in the batters box and put their very lives on the line.

Research indicates about 38% of active major league players served during World War I.  Eight current or former players were killed or died of illness during the great war.  Christy Matthewson, such a remarkable pitcher, was exposed to mustard gas in training which was a cause of his early death.  Some 500 major league players served in World War II.  Yogi Berra, the incomparable Yogi, was at Omaha Beach.  Hoyt Wilhelm and Warren Spahn at the Battle of the Bulge, Bob Feller lost four of his prime years.  In Korea, Whitey Ford, Don Newcombe, and Willie Mays all served. Ted Williams flew thirty nine combat missions.

We know players served during the Vietnam War. We know our baseball players are patriots. And, we see so many players honoring our Veterans.

The fact is baseball brings us together. One of its great and undeniable charms is that baseball cuts across political divides.

Don’t know about you but I sure want to shout “Play Ball!”

On this Memorial Day, more than anything else, I also want to say THANK YOU to so many.

Don’t really know where to begin, but to our Veterans, a tip of everyone’s cap, and a staunch and adamant salute. Be it a Cubs cap, a Yankees cap, a Dodgers or Red Sox cap… . or be it any team and every player, and of course every fan. 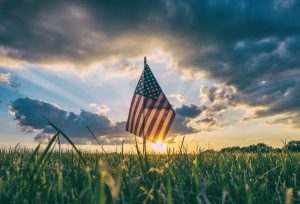