BABE RUTH, OR EVEN REDWOOD TREES ARE VULNERABLE

There is a wonderful group on line, Vintage Baseball Photos, aptly enough. This photo below was posted with a note that Babe Ruth’s fans, and the fans he enjoyed, were very diverse and no hint of discrimination at all. Another reason to like Babe, a lot. 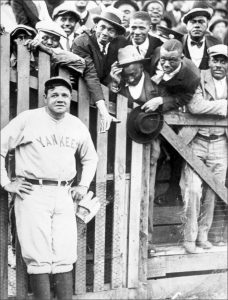 But, there is also a well known, iconic photo of Babe, being saluted but notably withered by time and illness. We see this truly larger than life fellow: Brash, incorrigible, notorious, charismatic, a bit of a scoundrel (or perhaps quite a scoundrel with “the ladies”), now thin, hunched over, no longer the super hero in presence. 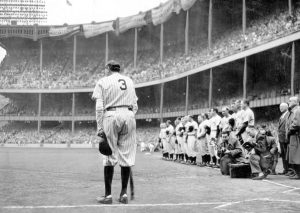 Maybe the photo is poignant for a reason, a reminder that life is fleeting, and glory likewise.

Babe Ruth remains a hero to me, nonetheless. He is storied but his life was hardly perfect.  I know, whose ever is? His dad dropped him off at a reform school as a kid. His first wife, Helen, was killed in a house fire. Babe was all of 19 when he married her; she was 16… They had a daughter, but later it was revealed she was adopted. Her name was Dorothy, and her real mother (Juanita Jennings) is a woman with whom Babe had an affair.

Babe married his second wifed, Claire, three months after Helen was buried. They had already been a couple. In fact Helen was living with another man at the time of her tragic passing. The news report indicates that at Helen’s brief funeral “tears streamed down Babe’s tanned cheeks… Unmindful of the snow which fell from the gray sky, the Babe, hat clutched in his huge hand, stood among his wife’s relatives, sobbing.”

Wait a second: “there’s no crying in baseball”

Babe did cry. He had misery, like we all do. He wanted very much to manage a team — never happened — he was shut out, shut down, left on the sidelines.

So I look again at that photograph reproduced above — and realize the red wood tree at some point returns to earth. The Sultan of Swat no longer will be sitting tall on the throne. Babe Ruth, just an ordinary man, faced with mortality, with all the foibles of an average joe. Babe Ruth, just one of us, after all.