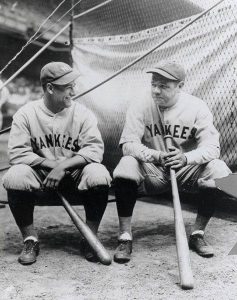 Lou: No way… how long that’s been, over a hundred years?

Lou: You sure they’re the D.C. team. Don’t they play in Baltimore?

Babe: Louie, they’re the Nationals, the Washington Nationals. They play in D.C.!

Lou: All right, cool down Babe.

Babe: Well, another thing in case you don’t know: They won all their games at the other team’s ball park, and lost all the games they played at their own home field…

Lou: Ok, that’s it Bambino. How many beers have you had?

Babe: Oh man… Just once would you believe me? Why would I make that up?

Lou: So, neither team in the world series won at home, only won on the road, and the team where the series started lost all four games on their home field? Is that what you’re telling me?

Babe: Iron Horse, I swear on a stack of hard balls…

Lou: Assuming you are telling the truth, assuming, cuz I never know for sure, but if that’s true, that’s gotta be making history.

Babe: Pal, you know and I know, baseball IS history. Sure history was made. Always will be, one way or another. Look at us… We made history, but it never stops. The MVP of the world series just now, some bearded guy, was given this incredible snazzy red car, I mean, have you seen that machine? It’s just sitting there on the field, glowing, you know.  Does he go touch it, get in it?  No…  he was clearly much more interested in hugging his daughter. I mean, that’s gotta be history right there!