I AM GOING TO LIVE MY DREAM Born in Kansas City, Dan Clemens’s family moved early on to Denver, Colorado.  By happenstance they were able to pick up a radio station out of Lexington, Nebraska, and listen to the Kansas City Royals games. Granted the radio connection faded in and out due to the weather, but this was a shared experience between father and son. 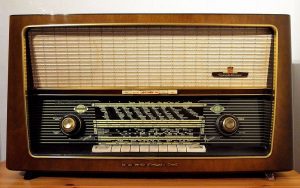 Dad was quite an athlete. In fact he was provided a scholarship to play basketball at the University of Tulsa. As such, by the time little Dan was able to sit up, various, round bouncing or rolling balls were a common part of his environment.  He and his dad also played some wicked whiffle ball. Bottom line: The apple often does not fall far from tree, or maybe we should say: The ball is not at all afraid of the bat. One of Dan’s first disappointments is when a number of his friends turned five and qualified for T-ball; poor kid he had to wait until he passed that critical age threshold to swing away.

Dan played baseball so well in high school he was given a scholarship to attend and play at Colorado State. He had his eyes on the big leagues, and was on his way. One of his idols, Roger Clemens, struck out 20 batters in 1986. Dan would stretch the truth a tiny little bit, and suggest to others he was Roger’s “third cousin, somewhat removed.”

Unfortunately (and maybe that particular word should be in bold print), shoulder surgeries can derail a promising career in baseball. 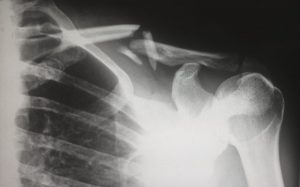 As a result, Dan never played professionally. He went on to marry a wonderful woman, and 29 years later they have two great kids . Dan definitely remained athletic, kept in very good shape, and participates on as many as five different baseball teams with players ranging in ages from 18 to well over 50 (oh, diversity of backgrounds is typical among the troops)

Then one seemingly ordinary day in May this year, Dan got an unexpected phone call. It was his former team mate Bill Rogan who was in his first year managing a professional baseball team, the Tucson Saguaros, in the Pecos League. Dan’s response to what Bill asked him: “You want me to do whaaaaaaat?”  Dan did not know that Bill had a perfect storm which left him short of players, and the season was at hand. A number of the guys were on hold because of NCAA regionals, and others were on pins and needles awaiting word about possibly being drafted by a major league team. “Dan I need some help pitching Saturday if not Sunday. Come on, it’s pro ball!” “ Well, wait a second Bill… I’m 51, are you kidding me? And when am I supposed to get there? I live in Denver, and you’re in Tucson.  I run my own consulting business!” Bill calmly replied: “It’s Friday Dan, can you be here tomorrow. After all, buddy, it’s the weekend…”

Like any very normal 51 year old, Dan immediately checked the airlines, called back in 20 minutes, and said “I’m on my way…” 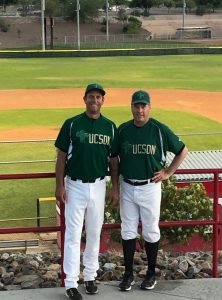 (That’s Dan on the left, Bill on the right)

You see, Dan always had a dream to play professional baseball. Just because he was now a lot older, had not pitched to professional players in recent memory (ok, probably never), and had a heart surgery one year prior, well, heck, why not go to Tucson, Arizona? Sure it’s hot there. Sure any number of the players are 30 years younger, a whole lot stronger, and quite possibly on loan from a major league team, but hey, a dream’s a dream right?

Dan got into the game that weekend, it was upper 90s out, pitched a full inning, and certainly did not embarrass himself, or the team. Ten days later, Bill Rogan has Dan come out to Bakersfield, also a notably hot place. Danny-boy pitched a good chunk of the second game of a doubleheader. After all, he had always been a starter. He took a shut out into the fifth inning. One of the real highlights is when he struck out a stud on the other team, who batted third, Dan overhead this comment from the dug out: “This dude is legit!” 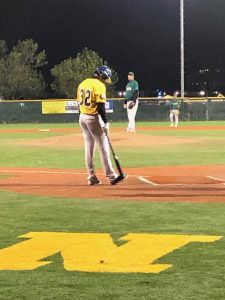 By the time this rather remarkable set of circumstances plays out, Dan is also going to travel to Monterey, and pitch there. He will, over the course of playing for the Saguaros, wear four different uniforms. Accommodations for the players are pretty much the opposite of high end, but he loved it, he rolled with it, and he did it for absolutely NO PAY. I guess he must have done it for glory, but he will tell you that he simply  loves the game.  As such the ringer on his phone remains quite loud. He will do it again, folks, if and when asked. 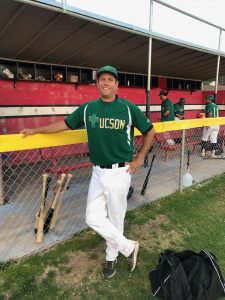 The overall stats: 3 trips from Denver and back; gets into 4 games; locations are Tucson, Bakersfield, and Monterey (in sum, two different states, Arizona and California): 8.3 innings, 3 runs, 4 hits, 2 walks and 4 ko’s. When he pitched in Monterey, it was the one year anniversary since his heart’s mitral valve was fixed so the blood flow was returned to normal. No big, right?

As I write this story, Dan Clemens is presently the oldest person to have played in a professional baseball game this year. Satchel Paige reportedly was 59 (possibly older) when he pitched in the MLB all those years ago. Hoyt Wilhelm, renown knuckleballer, 49.  Quite awhile ago as well.

By the way, Dan has four pitches: Slider, curve, knuckle curve, and a “fast ball”. He throws in the 70s, and what he wants you to know is over-powering hitters is not the be-all and end-all. “Be a pitcher not a thrower”, he will tell you. He will also encourage you to never ever give up on your dream (and just for the record, to also make sure to have routine medical check ups. Dan was doing fine, when a very ordinary visit to the Doc disclosed his heart was not pumping blood quite as well as it should).

Good stories some times get even better. When Dan pitched in Tucson his folks were there – in fact they live there. When he pitched in Monterey, he actually gave up a home run. The fans passed the hat around in the grand stands. With the help of Dan’s wife, they put some money together for the kid who hit the dinger. Dan was a bit astonished his wife would participate in raising monies for the other player who whacked his pitch into the stratosphere, but that’s what she does, and that is really what he does as well: Give. Give and live, and not give up on your dream.

Dan Clemens, a suggestion: Keep your phone turned on, and close at hand.  Yes, and keep that dream of yours at least as close.  You know, maybe we should get him a sandwich board:  Will pitch for the love of it! 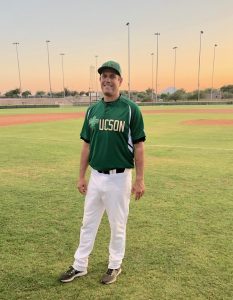