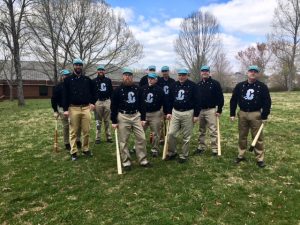 Serendipity is defined as an unplanned, fortunate discovery.

You see, we were in Tennessee.  Some of the folks in our group are history buffs, which meant a longish-stop-over at the home of our seventh President, Andrew Jackson (aka “ol’ Hickory”).  Not the nicest fellow, I might say with great understatement. But a stalwart, ahem, ahem…

Now, to be clear: I like history, but languishing at Heritage, the grounds where President Jackson resided, is not quite near the top of my bucket list. So I fretted a tad under my breath, fidgeted and then…. Well… perhaps like me you sometimes neglect that the baseball Gods are quite amused by the curve ball. The baseball Gods get quite a thrill out of a hook-slide that works even though it seems so obvious the runner is going to be out at the plate.  “Safe!” the Umpire shouts, and the crowd goes absolutely wild.

Bottom line, to my eye-rubbing astonishment I walked into a group of guys, and, well, I took the photo you see above. Those gents be some major league studs if you ask me.

I then spent the next hour (though it seemed like a few minutes)  conversing with various members of the Tennessee Association of Vintage Baseball. And, I watched a good portion of the baseball game they played, which was being played in accordance with the rules (I think he said) of 1880.  They draw real crowds, let me tell you.

Don’t believe me?  Check out the web site: http://tennesseevintagebaseball.com/

You Tube also has some fun videos worth a listen, if not a swoon.

Last year one of the venues at which they played is the Field of Dreams.

The word appreciation is defined as “recognition and enjoyment of the good qualities of someone or something.”

These folks appreciate baseball. They have such reverence they honor the game by recreating what it was, and enjoying themselves greatly while they do so. This means they play bare handed. A couple of the guys showed me swollen hands.  After all, the baseball they field is pretty damn hard!

When a run scored a bell sounded, to stay true to how it was “in the day”.

President Andrew Jackson.. if he only knew how he helped me expand my knowledge about our national past time. Here I went back in history to learn more about Andrew Jackson, and it worked out a little differently.  Like I said, those baseball Gods are pretty darn clever.

My baseball cap is off to these good people who value a Vintage, who take up the game as it was, who run and hit, catch and throw, who remind us of what we were.  When they do, they remind us not just of who we are, but what we can be:  Prideful, delightful, historic, and classic.

Below are some questions and answers from the Association’s web site. You might particularly like the very last factoid, about why their games are weeks apart. There is quite a lot here to read about and learn.

This is one history class I look forward to every day, although school was never quite my favorite past time.  Baseball on the other hand…

Vintage base ball (two words) is a reflection of how baseball (one word, the modern game) existed at an earlier time. Here are some of the main differences from modern baseball:

ARE YOU FOLLOWING THE 1864 RULES TO THE LAST JOT AND TITTLE?

No. We’ve made some changes to the way we play to account for differences in skill level and for the sake of inclusion. Here are some things you’ll see that you wouldn’t have in 1864:

All club members will bat in the lineup.

The rules of 1864 do not allow for player substitution. For the sake of resting our volunteer players, we will substitute men in the field as needed between innings.

While stealing is not a part of our game, we do allow for a one stride lead off of bases.

The official rules require a full nine innings of play for each game. If the team that is supposed to bat in the bottom of the 9th inning is ahead, the game will be declared over at the end of the top of the 9th inning.

The rules of baseball were first set down by Alexander Cartwright and his fellow ball players of the New York Knickerbockers Base Ball Club in 1845. Changes to the rules began immediately and change to this day.

Many revisions were published over the years, and due to the nature of communication in the 19th century, rules were different from location to location. For our program, we use the rules as set out in the 1864 edition of Beadle’s Dime Base-Ball Player.

In 1865, the bound rule was eliminated for fair fly balls. In later years the rules were changed to reflect a more skilled game, eventually leading to professional teams like the 1869 Cincinnati Red Stockings.

ARE YOU THE ONLY GUYS THAT DO THIS SORT OF THING?

Hardly. Currently there are over 400 teams in the United States and Canada. Many of the clubs are associated with historic villages or living history programs.

Old Bethpage Village Restoration in Bethpage, New York played their inaugural 19th century base ball contest in 1980. Around the same time the Ohio Village in Columbus started a 19th century base ball program. The Vintage Base Ball Association was founded in Ohio in 1996 and preserves and perpetuates the game of base ball as it was played during its formative years.

The Tennessee Association of Vintage Baseball’s member clubs are members of the VBBA.

THIS IS THE GREATEST THING I HAVE EVER SEEN. HOW CAN I PARTICIPATE?

Please visit our website to find out about open roster spots on our clubs. Ballists need to have a respect for the game, a love of history, and a gentlemanly attitude.  The Tennessee Association of Vintage Base Ball does not discriminate against any person regardless of gender, age or race. All skill levels are encouraged.

For those who miss out on these roster spots, the best chance to play in the future is to volunteer now. We are always in need of umpires, scorekeepers, concession assistants, or historic interpreters and demonstrators, and these people are given first preference when roster spots become available. If you are interested in volunteering please visit http://tennesseevintagebaseball.com/2015-volunteer-sign-up/ to sign up.

IF A SPECTATOR CATCHES A FOUL BALL, CAN HE OR SHE KEEP IT?

No. In fact, in the vintage game, only one ball was used throughout the entire game, and was given as a trophy to the winning club.

Absolutely, but co-ed teams are a more recent innovation, and one we heartily endorse.

THOSE ARE COOL BATS. WHERE CAN I GET ONE?

The Smacker Bat Company of Murfreesboro, Tenn. is the official bat supplier of the Tennessee Association of Vintage Base Ball.

CAN WE TAKE PICTURES OF PLAYERS?

Absolutely. Just one moment, let me put more pomade in my beard.

YOU GUYS ARE PRETTY OLD, ARE YOU SURE YOU’RE OK TO PLAY THIS GAME?

By scheduling our games weeks apart, it allows each club member to go to the 15-day disabled list after every game.