SLUGGER, AND THE ENDURING POPULARITY OF BASEBALL 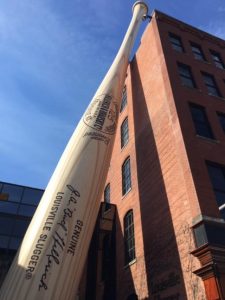 About a third of the way through our tour of the Louisville Slugger Museum and Factory, our guide Natalie said something that has really stayed with me:  “The size of the crowds here on any given day are a testament to the enduring popularity of the game of baseball.”

Here is a photograph of the bat prototypes Louisville Slugger made for Lou Gehrig and that other fellow, Babe Ruth. 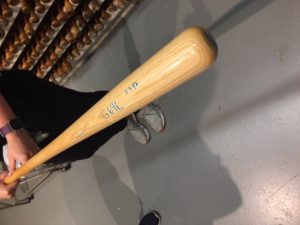 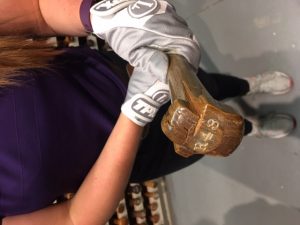 Here’s is the signature block they have from Joe Dimaggio when they imprinted his name on the bats. 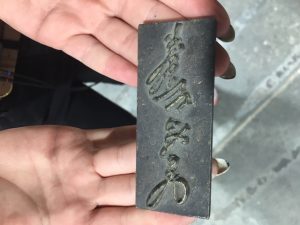 Here is a contract with Louisville Slugger signed respectively by Jackie Robinson, Roberto Clemente, and Ernie (aka Ernest) Banks.  Below these somewhat typed, formal looking agreements is the purely handwritten contract from that Ruth guy again… 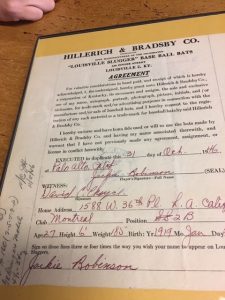 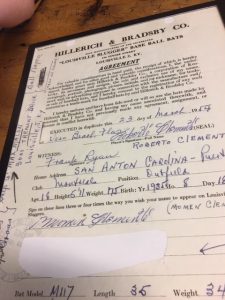 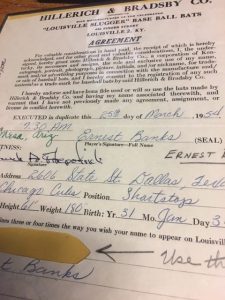 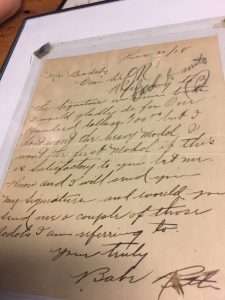 I learned so much from the tour,  For example, today the most popular bat in the major leagues is made of maple (80%), with Ash at 15% and Birch at 5%.  Batters can go through two trees a season, which translates to some 140 bats (70 per tree).  Most of the trees are in Northern Pennsylvania and Southern New York.  Real care is taken with the trees, not just the making of the lumber into bats.  Excess sawdust at the factory is provided to a turkey farmer in Indiana.  Some of the machinery at the factory dates from the 1920’s because it works so very well. 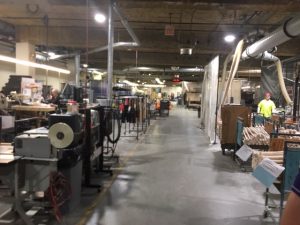 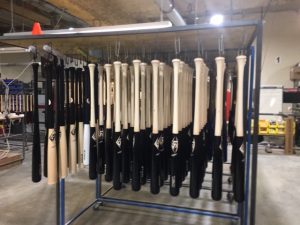 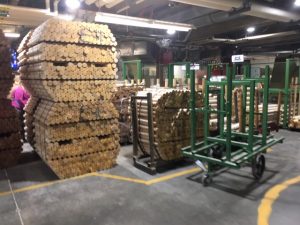 There are signs throughout of real history. If I am a decent judge of people, the staff I saw, watched, and observed, seemed genuinely happy.  Two of the Hillerich family members walked by us, one waved, and another (Bobby) told us how lucky we were to have Natalie as our tour guide.  The Hillerich family founded this place, a long way back.  The story is larger than life, like the bat outside. I just figure that bat belonged to Paul Bunyan when he played in the MLB some years ago… 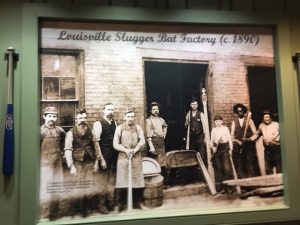 On occasion my buddy had to pull me away from items because I was holding things up.  I tried to explain that I was mesmerized, and felt like at any given time I was witnessing (not looking at, witnessing) some remarkable relic heretofore only seen once or twice in all of time.  I mean, I saw how they roughen the bat a bit like they used to do in the old days with an animal bone.  I found out they now put LS on the bats rather than the full name so it is easier to see on tv, and that there is an ash mark that helps to authenticate the bat. 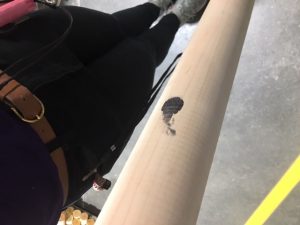 To think how it all came about, which itself tells you there are indeed some things that are meant to be. Some call it propinquity: Louis Rogers “Pete” Browning, nicknamed The Gladiator, a very good player but he was in a slump. Young Bud Hillerich, son of the founder of the factory (known for making certain kinds of wood products at that time, but certainly not baseball bats), decided to take in a local game, saw that Browning was struggling, approached him, told him he could make him a bat, he did, Browning used the bat, broke out of his slump, wanted more bats, others found out, they wanted those special bats…. Well, it’s now far more than one hundred years later.  That’s not to say Louisville Slugger has not had to change with the times, let alone keep up with them. During World War II the bat making was not going strong for obvious reasons, but gunstock was in high demand. 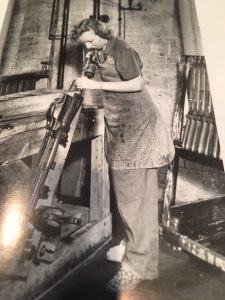 Bottom line: The Louisville Slugger brand has endured.  Baseball has endured.  They both had to grow up, they both have had to change, they both still have a lot to learn, they both are still going strong, and I dare say they are like family. The Louisville Slugger is an American story.  A story of invention, determination, perseverance, resilience, and undoubtedly a bit of good karma even amidst the struggles, fires and set backs.

After all, the bat is an integral part of the player, an extension of the player.  It goes into his or her hands.  It accompanies the batter at the plate.  It gathers dirt, scuffs, dents, and  bruises.  It is an enduring part of this enduring game, our national past time.  It is larger than life, just like the bat outside the factory  It is not a magic wand, but each player sure wishes it could be. 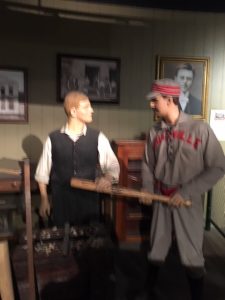