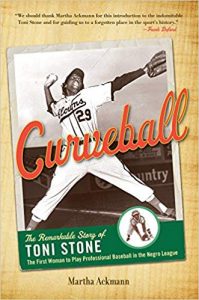 Baseball is full of lore.  One reason why — there are true stories that really do seem larger than life.  Many of those stories are well known — but not so much Toni Stone.  Oh, sorry, I mean Toni “Tomboy” Stone.  She just made history in 1953 as the first woman ever to play professional in a men’s league (at that time the Negro Leagues).
“Baseball historians call her the female Jackie Robinson, the best baseball player you’ve never heard of…”, to quote Martha Ackmann, author of the wonderful book “Curveball, The Remarkable Story of Toni Stone”.  She faced a lot of jeers from the crowd, and some of her own fellow players sought to sabotage her.  So what did she do after baseball?  She was a nurse, helping to take care of people, including her older husband who lived to the ripe age of 103!
Tomboy Toni if she was fortunate could change in the umpire’s locker room, not as part of the team.  She described her experience at times as “hell”.
The good news:  In 1985 she was inducted into the Women’s Sport Foundation’s International Women’s Sports  Hall of Fame.  Her story has been part of exhibits at the Baseball Hall of Fame.  In 1993 she was inducted into the Women’s Sports Hall of Fame.  A few year earlier her home town of Saint Paul, Minnesota declared March 6 “Toni Stone Day”, and there’s a field in St. Paul named after her.
Look, there are a lot of pioneers, including in baseball.  She is not just a footnote, if you ask me.  She’s a true advocate of the great motto we all say so many times in our life:  Play ball!