Whoever came up with the Batman super hero, complete with cape, probably was not a baseball fan.

Batman should be just that — a man and a bat.  He doesn’t dwell in a cave.  He comes up from the dug out, swings a time or two, pivots his neck from side to side, takes a deep breath, digs in with the cleats, stares down the pitcher, and then sends that gnarly round white ball into orbit.

Well, maybe that slogan is not quite catchy enough.  We could dress our Batman up in appropriate fashion. Stars and stripes?  Or, Superman blue and red, with a yellow lightning bolt in the shape of a baseball bat emblazoned across his chest.  And he could, on occasion anyway, rescue someone just to broaden the legend.  Or, more aptly, raise a lot of money for charity, like so many ballplayers do.

Batman, the baseball dude.  Wow, I say brand it!

But, the bats have to take a pause here.  Bats, hang yourself up.  Rest for just a little bit.  I want to talk about mitts.  Gloves.  You know, them things you put on your hands?

For years my dad would plop my baseball glove on my head, then walk with me, his arm around my shoulder. I came to believe the mitt was an outgrowth of my scalp.  When I asked mom, she laughed.  She would say, “Well, if your dad has anything to do with it, that will be a permanent part of you, but you need to put it on your hand at game time, not your head…” It really bothers me that “if the glove don’t fit, you must acquit” became a remark of some renown.  Let’s just be sure everyone knows he wasn’t talking about a baseball glove.  And, let’s make sure everyone knows that a baseball glove is no ordinary glove. It doesn’t fit in a purse. It isn’t worn for looks, and its purpose is not to keep one of your hands warm.  The goals are:  Catch the ball, secure it, be done with it; protect the hand, and if you’re quick enough, shield other parts of your body.  In sum, assist the player to a real degree in his work. To be certain, it’s a lot harder to shag fly balls with bare hands, and even tougher to do that with grounders.   But, that is how it started.  After the Civil War, baseball began to become popular.  Players did not wear gloves then.  In fact it was not until around 1868 that the first baseball gloves were used, and not until the early 1900s that most players actually wore gloves.  Yes, the game has changed a great deal.  Much of the throwing in the early days was underhand, but even so there was some ongoing resistance to have any protection or padding. Then there were fingerless gloves at one point.  A legendary story is about a St. Louis outfielder and first baseman Charlie Waitt, who wore a pair of flesh-colored gloves in 1875, was ridiculed mercilessly by both fans and players, but continued on.  A.G. Spalding — the one who with his brothers started a significant sports equipment company — realized Waitt might be on to something:

“I had for a good while felt the need of some sort of hand protection for myself.  For several years I had pitched in every game played by the Boston team, and had developed severe bruises on the inside of my left hand.  Therefore,  I asked Waitt about his glove.  He confessed that he was a bit ashamed to wear it, but had it on to save his hand.  He also admitted that he had chosen a color as inconspicuous as possible because he didn’t care to attract attention…  Still, it was not until 1877 that I overcame my scruples against joining the ‘kid-glove aristocracy by donning a glove.  I found that the glove, thin as it was, helped considerably, and inserted one pad after another until a good deal of relief was afforded…”

There are patents for baseball gloves, and different kinds of gloves:  Catcher’s mitt, infielder’s outfielder’s, pitcher’s… first base. 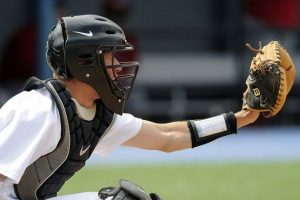 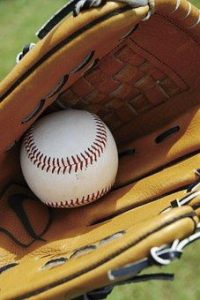 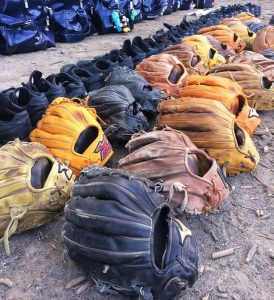 The baseball mitt has its own shimmering place in history.  Who wouldn’t be a bit awed to have a chance to take a nice long look at the glove worn by Brooks Robinson, the remarkable third baseman for the Baltimore Orioles? He won 16 Gold Glove awards for fielding excellence. Why though do they call the award a “Gold Glove”?  You need to be able to flex your hand in the glove — it can’t be made out of gold!

Early baseball gloves were made of simple leather. In 1920, a pitcher for the St. Louis Cardinals named Bill Doak, suggested a web be placed between the first finger and thumb, and voila, the pocket!  He patented this design, and sold it to a company named Rawlings (ever hear of ’em?).  And, did you know — if not you do now — that for years players left their gloves on the field when they went in to bat?  This routine was finally prohibited by the major leagues in 1954.

For the record:  Baseball gloves typically are worn on the non-dominant hand; so the player can throw with his dominant arm.  And, lest there be any lingering doubt, the shape as well as the size of the baseball glove is governed by official baseball rules:  Section 3.00 – Equipment and Uniforms, with the specifics at Section 3.04 through 3.07.

I am reading now that one company is experimenting with combining leather and Kevlar, the latter which is utilized in bullet-proof vests, of all things.

What I recall, and it is still true today:  It takes awhile to “break in” your glove.  Back when my dad used to plop the mitt on top of my head, it was Neatsfoot oil.  I would get that rubbed in, go to bed, and the first thing I did when I got up in the morning was see if my precious friend, my baseball mitt ,was softer, more pliant, easier to maneuver with my hand.  We had some mighty good work to do at short stop, folks.

After writing this I went out to the garage where I keep my glove.  It doesn’t get as much attention as it used to.  I guess you could say it retired from active play…  But, it does still fit well on my head.  And when I put it there, just so you know, I feel my dad’s arm around my shoulders.