WHEN IT’S OK TO BOBBLE And now a quote concerning the all important history of the bobblehead:

“Bobblehead is a collectable doll… which has a characteristically oversized head that is connected to the body with  a spring or wire and when the head is lightly tapped it would bobble from which the doll got its name. Some of the alternative names are bobble heads, Thanjavur thalayatti bommai, bobble head dolls, Tanjore head-shaking doll, bobbing heads, moving heads, nodders… akabedko, wobblers and nodding heads.”

Funny, all this time you thought they were just Tchotckes (that’s pronounced “Chots-kees”).  Little did you know you might own a Thanjavur thalayatti bonmai…

Historically, Chinese nodding-head figures are traced to England and Continental Europe by the 1760s.  Russian writer Nikolai Gogol, in an 1842 short story “The Overcoat”, described the primary character Akaky as having a neck which was “like the neck of a plaster cat which wag their heads.”  At the turn of the 20th century, 1901 if I am not mistaken, antique ceramic bobbleheads of animals were made in Germany in sizes of 6 to 8 inches.  Then, there is controversy — although the New York Knicks were not established until1946, research suggests the first sports bobblehead was a New York Knick in 1920.  It is in 1960, the beginning of that wondrous decade of “make love not war” (a great slogan but not quite the reality)… that the first papiermache and ceramic player specific bobbleheads were made. They were Willie Mays, Roberto Clemente, Roger Maris and Mickey Mantle.  Except, are you kiddin’ me, they all had the same angel-like face? They did not look like the guys themselves?

Now I’m reading about a lull in the bobblehead popularity by the 1970s, and then with the 1990s the manufacturing processes turned to resins and hard rubber, reducing the cost and fragility of the bobbleheads. And finally a promotion in May 1999 by the San Francisco Giants which brought the beloved heads back to the public’s attention with a vengeance:  A Willie Mays bobblehead was made available to the first 20,000 visitors on the 40th anniversary of then-Candlestick Park.

The heads have not looked back since…

After all, you do know there is a National Bobblehead Museum and Hall of Fame, which you can find on line at http://www.bobbleheadhall.com/.

And please…. don’t tell me you don’t celebrate National Bobblehead Day?!  It’s every January 7 folks, so make sure to have it marked on your calendar.  For goodness sakes, let’s have our priorities right!

In order to lend greater credence to this article, I managed to catch up with Richard B. Chase, Justin Dart Professor Emeritus in Operations Management at the University of Southern California, Marshall School of Business.  Among other rather impressive feats, he is the co-author of Operations Management for Competitive Advantage, translated into 13 languages throughout the world, in its 15th edition, and the recipient of all sorts of awards.  Oh, he also has a rather outstanding bobblehead collection. For example, from left to right below: The Baltimore Orioles bird, circa 1969, Beetle Bailey, the inimitable John Lennon, and good old Bob’s Big Boy.  These are all papiermache, with quite a bit of age on them, but don’t they look great? This goes back many years, when Don’s head was utilized on a variety of different bases.  Although it was the great Dodger pitcher, his name was not placed on the bobblehead, nor was it sold as a Drysdale bobblehead.  Given its scarcity, Chase estimates the price at some $700.  “Scarcity is what can really drive up the price for these things.  What you really want is one of those team prototype bobbleheads, like the 49ers, years ago.  Those may be a foot tall, and can go for $10,000 to $12,000!”

All of this is indeed very interesting, but what I really want to know is:  Why?

Why am I so into bobbleheads?

Why do I go to games because there’s a bobblehead giveaway?  When did I get hooked?  Do I need a 12-step program to overcome my addiction?  Will the yearning ever wane?  I mean, after all, what the heck can I do with these things?  They are all over my office.  I even have an occasional nightmare when they all start bobbing at the same time, moving toward me. Their smiling faces remain, their large eyes beaming.  Then the bats start swinging at my head, the arms start flailing at me, and I wind up like Telly Savalas in that infamous Twilight Zone episode about the talking doll, lying at the bottom of the stairs, never to bobble again…. The Tommy Lasorda Garden Gnome cackling above me.

To be certain, the bobblehead craze could be getting extreme.  For example, if you follow the Dodgers, I hear they’re thinking of a Yasiel Puig bobblehead that puckers up, and then you have to attend another game to get the Turner Ward batting coach bobblehead.  The goal:  Place the Puig bobblehead next to the Ward bobblehead, and tongue-wagging Yasiel starts smooching his cheek!

Holy nodding up and down:  What if they give these things artificial intelligence?!

I used to go to the games with my baseball mitt. If God was good I might go home with a baseball, or a pennant, maybe a player jersey.  Now it’s the bobblehead.  I covet the bobbleheads.  I horde them in a secure environment.  On occasion I even talk to them, make sure they know how much they’re appreciated.  Truth is they are very agreeable.  They nod up and down without almost any prompting at all!  I never met a bobblehead who didn’t seem to agree with most everything I ever said… Oh, in case you might wonder even a little bit:  The data suggests bobbleheads today are cheap to make, and really help bring in the fans.  No less than Forbes magazine published an article in August 2016 that 153 major league baseball games featured bobblehead giveaways that year, a 15% increase from the prior season, and that not only did ticket demand accelerate but so too ticket prices went up!

Let’s face it:  Soon to be a major motion picture — Attack of the Bobbleheads! 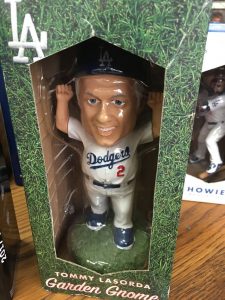 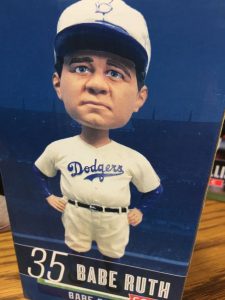 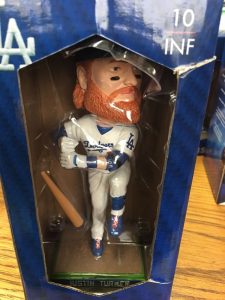 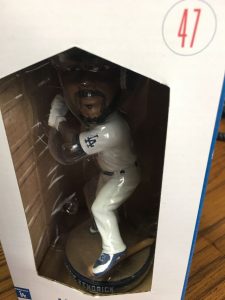