Did you now his folks divorced, and he was raised by his mom? Looks like she did a pretty darn good job.

His great Uncle, Clyde Tombaugh, discovered Pluto. Maybe that’s why some of his pitches are described as almost impossible to see.

He’s the first pitcher in history to lead the major leagues in earned run average four consecutive years, 2011 through 2014. He has a career hits- allowed-per-nine-inning-pitches of 6.61, the second-lowest in history.

In high school, during the play offs, he pitched an all-strikeout perfect game. To be very precise about it: He struck out each of the fifteen batters he faced, and the game was shortened because of the mercy rule.

Mercy rule? You think they might get that adopted in the major leagues now? He is downright ruthless. I’ve even seen him shout very angrily into his mitt when something doesn’t go well, and, to be sure, he is extremely competitive. I mean, really, really intense, even when he’s playing ping pong in one of his charity gigs.

But… by all accounts, he’s a genuinely nice guy. An absolute gentleman. A wonderful son, father and husband. Plus the guy is generous to a fault.

In addition to all that, he is quite open about his devout faith. Bottom line: His charity work is substantial, exemplary, and there’s just no end in sight. He really is all that, even with a scruffy beard.

So, I’ll ask: What’s not to like about this guy, unless you have to bat against him?

Does it boggle your mind a little that at the moment he’s just turning thirty?

Granted, baseball is a lot about numbers, and statistics, but it also lends itself a bit to mythology. You look at old black and white photos, sometimes bumpy film of players like Jimmy Foxx, Christy Mathewson, Grover Cleveland Alexander, Ted Williams. These are men, mere mortals, who had good days and bad, like all of us; who did not walk above the ground, and who landed back on earth when it was their time.

But, fans do not think of them that way. They are part of the lore. They are talked about in stories, poems, and anecdotes. On porches, in

ball parks, on benches, in living rooms, television, over the radio, at lunch, dinner, that morning, that evening, we hear about these legends. It is as if they have never left us, have always been what they are, what they were: Remarkable, outstanding, virtually undefeatable, baseball heroes. If one walked by, just about everyone would get pretty quiet, shrink a little perhaps, or instead start gushing.

“Look…. loooooook….. do you know who that is? That’s…. that’s…… Cy Young himself! That’s Lou Gehrig! That’s Mickey Mantle! That’s the Babe!”

You see this photo here. Yep, that’s Kid K. You wonder what those kids are thinking? I can tell you! 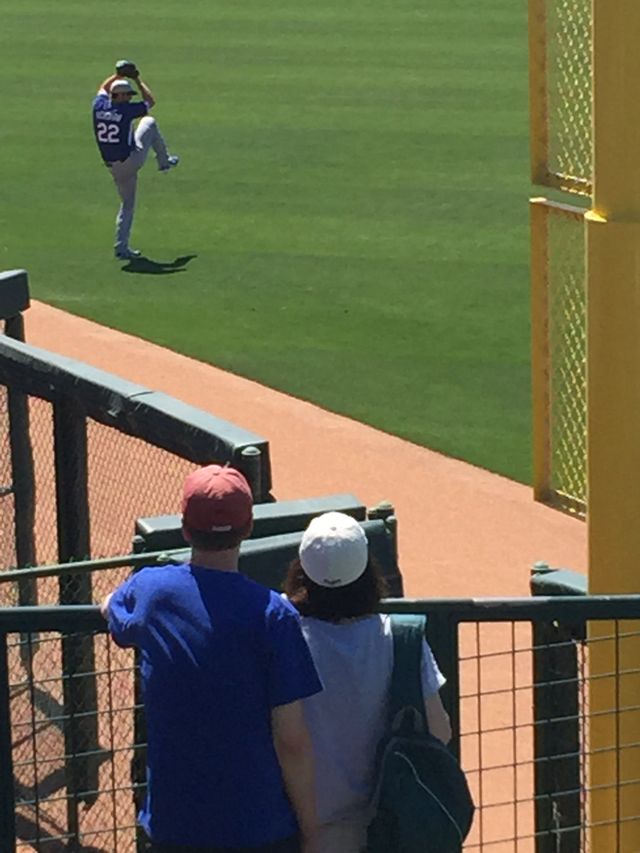 “Chris, we should go talk with him. When he’s done I mean. We should go say hi…”

“You bet I do! You wouldn’t want to be like him? Man, he is sooooo good! Batters are afraid of him, you know. He’s like, like, you know, like his arm is a rifle or something!”

When Kershaw was done warming up, the two boys did walk  up to him. At first, Clayton had his back to them. He was bending down to pick up some equipment.

“Mr. Kershaw, my name’s Chris. This is Freddy. We just wanted to say hi!”

Clayton stood up. That’s when the boys realized how tall he is in real life. He had a big smile on his face, brushed his hair back (as he tends to do), and put out his hand. Chris shook it excitedly, and Clayton laughed a little.

“You got quite a grip there buddy!”

Freddy was completely wide eyed, so Kershaw offered, “How about a fist pump?”

Freddy did so,  but in kind of a trance.

“You guys from around here?”

“Yeah, we go to school at Meadows…”

“We’re both goin’ to grow up and play in the major leagues. I play outfield. Freddy’s a pitcher. He’s actually pretty good!”

“Well all right…. It’s hard work you know, but keep at it. Real important to work hard and not give up. You both know that, right? Good meeting you…”

Kid K walked back to the club house, turned and did a final wave to the boys.

Chris and Freddy did not move for a little bit. When Chris looked at Freddy he noticed some tears rolling down his cheeks.

Freddy tried to talk but was too choked up. He just shook his head and looked at his hand.

The boys watched the game that day. Kershaw pitched three innings, and was just about flawless. This is just a spring training game, but the boys were beyond thrilled, and they were there with their dads.

“Wow, you talked with Clayton Kershaw? Did you learn anything from him?”

“He told us what you always tell me – same thing: Never give up. Work hard… that’s what he said. He was real nice. He’s real tall. It was really cool…”

Freddy’s dad said, “ I hope you take to heart what he said. He’s a lot more than just a baseball player you know…”